The International Congress of Aesthetic & Anti-Aging Medicine, Poland’s leading annual event in medical aesthetics, which took place in Warsaw on 27-30 September 2018, was the perfect timing and occasion for NUNII and its new distribution partner MEDIF to introduce NUNII’s scientific expertise in pigmentation treatments. This event marked NUNII’s official launch into the Polish aesthetic dermatology market. Building on 20 years of experience in aesthetic medicine, Joanna the director of MEDIF aesthetic division represents perfect ambassador to introduce Nunii to Polish dermatologists and dermo-cosmetics practitioners.

At the ICAAM, Dr. MAGNANI was the distinguished French guest speaker for NUNII symposium which by all accounts was a great success, providing rich interaction between NUNII representatives and physicians all eager to learn more about the breakthrough UNIQ WHITE SYSTEM for pigmentation disorders and the science behind it. 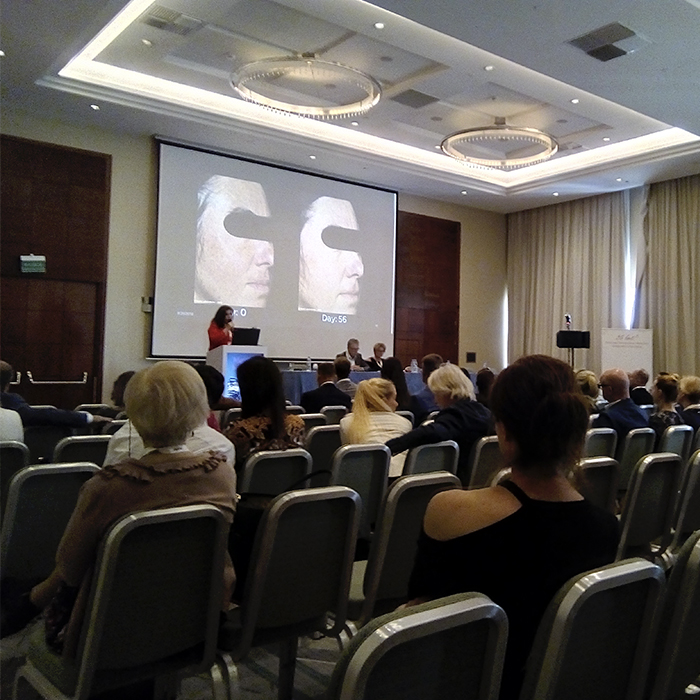 Presentation of Dr. MAGNANI in Poland

The dermo-cosmetics market in Poland

According to Joanna MEDIF’s Aesthetics Director “The dermatology and dermo-cosmetics sector in Poland is very specific. It is a market that is in fact quite open: since Poland is a country in which any dermatologist or physicians can open a practice after only one or two years of training in aesthetics and dermo-cosmetics. Private clinics and medical facilities are all equipped with state-of-the-art medical tools and the practitioners carry out all the procedures one can expect to find in the sector of dermatology, such as filler injections, procedures with Botox, or mesotherapy treatments. They also routinely provide dermatology services such as peeling, autogenous fat transplant and also hair transplant, to name the main ones.

Often, physicians and dermatologists work together in shared private practices, which enables them to be present on a year-round basis, and thus better cater to the patients’ needs. It is worth noting that mostly through the extensive network of practitioners in the country, the Polish dermatology and dermo-cosmetics market is highly developed, structured and lucrative, making Poland an extremely strategic commercial market to be present in.”

Joanna goes on to say that “In fact, the dermatologists and physicians in Poland continuously monitor all new dermatological findings, which allows them to stay abreast of the latest scientific discoveries and treatment procedures. Obviously, they adopt the latest technologies and equipment in dermatology, which enables their patients to benefit from cutting-edge treatments such as NUNII. As is the case in many other regions of the world in dermatology, practitioners in Poland particularly favor treatments and skin care products which more than ever respect their patient’s skin. The growing use of products and techniques that are as gentle as possible to treated skin are often very costly and represent a big investment for Polish patients, who are not eligible for reimbursement of such procedures with their national health system.

Polish women as dermo-cosmetics patients: specific profiles to cater to

The Polish women who consult with their dermatologists are predominantly urban women who live in the 15 most populated urban areas in the country. They take great care of themselves and are often sporty and almost always favor balanced diets and healthy lifestyle habits in general.

As the main their desire is to remain healthy, as young-looking as long as possible and to slow down the ageing process, they often consult with their dermatologist, when pigmentation spots tend to appear on their skin: they typically show a high level of concern for their personal and professional appearance.

According to Joanna today’s female patients in Poland have grown more demanding when it comes to the dermatological treatments they choose: they opt for protocols that avoid social eviction or which do not interfere with their free time or holidays: a few days out of their professional environment can have strong negative financial and/or strategic consequences on their jobs, especially when treatments are laser-based for example, not to mention the costs of such procedures.

Dermatologists Joanna says also pay particular attention to a type of women patient: those with sensitive skin. Practitioners avoid orienting such patients towards stringent and invasive procedures. What’s more, most women naturally claim that their skin is sensitive, even when this isn’t truly the case; their goal being to protect themselves against the major allergens. Besides, they are highly suspicious of invasive protocols in dermatology, because they believe that such procedures weaken their skin and as a result expose them further to external stress factors.

Men in Poland increasingly consult with their dermatologists, and it so happens that some men too may suffer from aesthetic skin disorders, but this is relatively uncommon, due to the fact that women’s specific hormonal system exposes them more often to dermatological problems.

Joanna sums up the growing craze for NUNII “We are thrilled to be the Polish distributor for NUNII as we believe their uniq-white system answers these growing market trends for less aggressive treatments. NUNII products allow doctors to precisely tailor a depigmenting treatment to patients’ lifestyles, and this exactly meets the expectations of patients in Poland and across the world, where personal and professional lives, although rich and fulfilling, do not allow for a long downtime from their normal routine. The other great benefit of NUNII products and treatments is that they significantly and quickly improve skin appearance and texture by eliminating dark spots and imperfections, and the very nature of the non-invasive NUNII treatments also contribute to patients’ peace of mind”